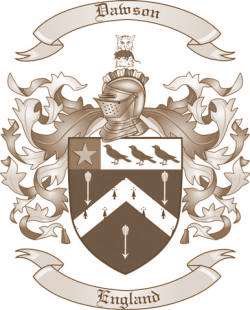 1.  John Dawson was born October 1640 in England. According to One World Tree, he was baptized 27 October 1640 in Hemingbrough, Yorkshire, England.  He immigrated from Saint Mary Castlegate, York, Yorkshire, England; which is about 15 miles from Hemingbrough. The Passenger and Immigration List Index has his arrival into the Province of Maryland in 1672.

Sometime after his arrival, John settled in Charles County, where he had applied for and received a land grant. John, who was styled planter, is believed to have been married twice during his life. He is thought to have married first, shortly after arriving in Maryland, to a woman named Rebecca Doyne.

Rebecca was the daughter of John Doyne who held a land grant on Chickamuxon Creek in Charles County, Maryland. Family tradition, as stated by at least one researcher, suggests that John and Rebecca met aboard ship during their voyage to America, but that initially there were objections to their getting married because of differences in their religious beliefs. John, it appears, belonged to the Church of England, while Rebecca, a native of Ireland, was a Roman Catholic.

John and Rebecca had five children, Charles, Edward, John, Nicholas, Thomas. They are reputed by some researchers to have had seven children, but only five have been identified as either known, or very probable. Their exact order of birth is not known, however. Although Rebecca apparently died in Charles County, Maryland, the actual date of her death has not been determined.

2. Edward Dawson married Mary in Prince George Co., MD, where he died in 1732. They had three children, Edward, Mary, and Elizabeth.

4. Edward Dawson born 19 June 1730 in Prince George Co., MD. married his first wife in Prince George, MD. They had Edward and possibly more lost during the American Revolution. Edward and his second wife, Elizabeth, had seven children, Isaac, Thomas, James, Elizabeth, Anna, Macy/Mahaliel, John. Edward was a farmer. He and his son Edward settled on military tracts west of Fort Cumberland. Both of them took the Oath of Allegiance in 1778. He was referred to in the 1788 Allegany Co., MD records as Edward Sr. and was listed among the early settlers there.

There has been much speculation about whether Edward came from Prince George or New Jersey. I believe they are both right. Since this is a blog and not a genealogical document, I am free to express my thoughts and theories. I believe Edward and his first wife left Prince George after 1757 and moved to New Jersey. His first wife probably died before 1767 and he married Elizabeth. They had four children in New Jersey and moved to Allegany before 1773.

According to the family records of Pat Pulasky, Edward died 11 Sep 1794 without a will. The first recording of his estate that I have found was in 1800. I have copies of the probate files and inventories in Wills and Probate. It looks like there was conflict within the family over the estate and it wasn't settled until 11 Dec 1805. Elizabeth possibly applied for a bond of marriage to Daniel Cresap, Sr, who had adjoining property, 28 Nov 1796. She died 13 May 1813.

5. Edward Dawson born 1755 in Frederick Co., MD married Hannah 1774 in Frederick Co., MD. Edward and Hannah had two children,  Elizabeth and Leonard, who were born in Washington County Maryland. These were transitional times during the birth of a nation. Frederick was the first new county to be created in the western Province of Maryland. Frederick was later divided into Washington and Montgomery County in 1776. Allegany County was created in 1789 from land that was previously Washington County. Edward was born, married and had children in what is now Allegany County. 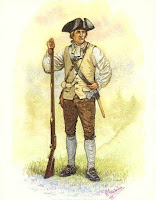 Edward was a farmer. During the American Revolution He was a private in the Washington County Militia, 1st Class, Capt. Daniel Cresap’s Company, 3rd Battalion in 1776 and 1777. Edward took the Patriot Oath of Fidelity and Allegiance before the Hon. Samuel Barrits on 16 March 1778. According to the 1800 census he resided in Upper Old Town, Allegany, MD. After his father's estate was settled he moved to Ross County Maryland.

In April 1805 he was elected as a constable in Ross County Ohio. According to Ross Co. Deed Records, Edward did not receive a land grant for being a solider, but acquired land from Abraham Baldwin, a Revolutionary soldier, who received 666 acres from the government. The Ohio Census records he lived in Jefferson Township, Ross County, OH until 1818. In 1820, he is recorded living in Franklin Township, Ross, County Ohio where his daughter, Elizabeth, and son-in-law, Enos Moore, were living in 1830. The 1830 census shows him living back at Jefferson Township where his son, Leonard, was farming.

Some histories state that Edward followed his daughter to Indiana, but considering the fact that they were living in Ohio in 1830 and Enos Moore purchased land in 1832, I was suspect they traveled to Indiana together. According to the U.S. General Land Office records, Enos Moore purchased 80 acres in Tippecanoe County, Indiana on 6 June 1832. Edward died 28 August 1833 and was buried in the family cemetery, Shelby Township, Tippecanoe Co., IN. Hanah died 25 July 1839, only her stone is left standing on the old farm cemetery in Shelby Township.

The Sons of the American Revolution have placed a tombstone in Greenbush Cemetery, Lafayette, Tippecanoe Co., IN. On 17 May 2003, the William Henry Harrison Chapter SAR. had a rededication ceremony. There has been a lot of controversy over Edward's military service in regards to the DAR/SAR. "The Roster of Soldiers and Patriots of the American Revolution Buried in Indiana" claim He was a Private in Capt. Samuel Montgomery's Co., 7th Pa. Reg., commanded by Col. William Irvine, Continental Line enlisting 24 December 1776 during the Revolutionary War. This has since been proven incorrect and the DAR has updated its records to show his service as a patriot.

6. Leonard Dawson born 1778 in Washington Co., MD married Mary Jane Wolf 15 August 1797 in Allegheny Co., MD. They had twelve children, Edward, Thomas, Leonard, Charles, Nancy, Hannah, Dytha, Mariah, George, Eliza, Mary and Elizabeth. Leonard was a farmer. He settled in Ross County Ohio in 1805 with his father, Edward, when they migrated from Maryland. Together they farmed one hundred acres until Edward and Hannah retired to Indiana.

Mary Catherine's father Frederick Peppers was a farmer and moved to Ross County Ohio, in 1819, from Frederick County Maryland. According to the 1830 census the Dawson and Peppers families were neighbors in Ross County with both families migrating from Maryland.

In 1836, Ed and Mary moved to Warren Co., IN where Edward's grandmother Hannah was living. This must have been a very arduous trip with nine children in tow. They had seven more children after moving to Warren County.

Frederick's  family moved to Warren Co., IN when he was very young. He was still living in Warren County during the 1860 census with his wife, two children, and mother-in-law. Shortly after the death of his mother-in-law he purchased a farm in Ash Grove, Iroquois Co., IL, probably with Susan's inheritance. 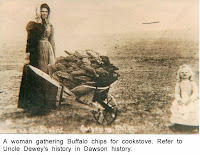 The story is told of the time when Frederick visited James Edward living on the prairie of Kansas. He bragged about the good toast that Madora had made for breakfast. In those days the main fuel supply was buffalo chips [dried manure] that were gathered from the prairie. One morning he got up earlier and found her toasting the bread over the buffalo chip fire, after he saw this, he didn't think that the toast was near as good.

After 2 years of being a widower, Frederick married Theodosia Heath 1 Feb 1891. They had one daughter, Freda. Around 1905 Frederick purchased a large tract of land in Madison Township, Allen Co., IN. I wonder if his new wife wanted a home of her own, without the ghosts of his first wife.

Frederick gave each of his four living children, from his first marriage, an eighty-acre tract of land adjacent to his. I suspect this was not only to have his children near, but to compensate for loosing their family home and ensure their inheritance. He lived in Allen County until his death 13 Nov 1914. He is buried in Maple Grove Cemetery, Milford, IL I have a copy of Frederick death and marriage certificate in Documentation Photos.

This is important in tracing our linage back for the DAR/SAR. On the marriage certificate Frederick states that he was born in Ross County Ohio, which traces us back to the Edward in the Revolutionary war. On Frederick's death certificate, James "Edward" states that he is from Sisto [Scioto] County Ohio. It is possible that he visited relatives in Scioto township, Ross County, Ohio. It shows how easily genealogists, amateur and pro, can connect to the wrong information.

You might wonder what are the odds of another Edward and Catherine Peppers being from Scioto County Ohio...you would be surprised. With the help of Ancestry.com and the internet you can find records from around the world at the tip of you fingertips. Wow...it is a long way from scrolling through microfiche and old dusty books. I have been amazed at how many same/similar name combination there are out there. It really takes due diligence and I have tried to be very careful with the facts. I have made mistakes along the way, but I usually go over the facts enough times to catch them. Please don't hesitate to bring one to my attention.

Email ThisBlogThis!Share to TwitterShare to FacebookShare to Pinterest
Labels: From the Beginning
Older Posts Home
Subscribe to: Posts (Atom)