9. James Edward Dawson born 11 November 1855 in Warren Co., IN married Madora Eleanor Thomas 25 September 1878 in Milford, IL. Madora's father B. F. Thomas owned the Thomas School in Milford, IL and was a farmer. James and Madora had ten children, Arthur, Glen, Audrey, Fred, Flossie, Thomas, Edward, Frank, George and Rexford. James Edward was a teacher and farmer. He graduated from the Gem City Business College, Quincy, Illinois and was hired to teach by B. F. Thomas. Since it was necessary to live near the school he boarded at the Thomas home. Madora's mother had died when she was 14 so it was necessary for her to quit school and take care of her five sisters and two brothers.

It is assumed James Edward found time to tutor her where love blossomed. After they were married James leased farmland from his father and also taught school. In 1885 the words "Go West Young Man" became popular with the enactment of the Homestead Act. James, Madora and three small children moved to Emmence Finney Co., KA to a homestead of 160 acres. This land was prairie land on which buffalo roamed. Their land was forty miles from the nearest railroad. In those days the main fuel supply was buffalo chips gathered from the prairie. The story is told that when Frederick Dawson visited the family he bragged about the good toast he had for breakfast.

One morning he got up early and found Madora toasting the bread over the buffalo chip fire and he didn't think the toast was near as tasty. Each year that the family was there, crops were planted but the hot winds and dust storms destroyed them before they could be harvested. After three years of these crop failures they gave up their homestead and loaded up their family and possessions in a covered wagon and went to Cozad, Dawson Co., NE. The distance between their homestead and Dawson Co., NE was only 225 miles, but it took them three weeks to travel by covered wagon. 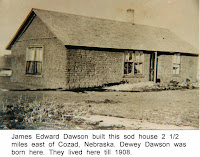 The family lived above a grocery store. Later they built a small frame house in the eastern part of Cozad. The house still stands to this day. While there James taught school in a sod building which was in the country. He also operated a tin shop. In 1892 they moved to Shelton, NE where the family operated a store and a bakeshop. In 1893 they moved back to Cozad where they acquired 80 acres and James Edward built a sod house on it for his family. This was one on the first sod houses to have a shingled roof, wood floor, glass windows and screens. In 1899 Arthur returned to Milford, IL, by bicycle, to go to high school.

In 1901 the family moved to 40 acres in Rochester, IN, Audrey married and remained in Cozad. The sandy soil in Rochester was not productive except to produce berries, vegetables and other small fruit. When the produce was in season it was picked and sold from door to door in Rochester. Transportation in those days was with a horse and spring wagon. In 1907 the family moved to 80 acres that had 40 acres of virgin timber in Monroeville, IN. James' father gave it to them. The soil was fertile so good crops could be raised. The school was only a quarter mile away.

The family was very busy clearing land to be used for crops, building a home, barn, chicken house, granary, hog house and machinery shed. Farming was done with real horsepower. The family had a herd of Jersey cattle as well as a herd of Chester White hogs. Many chickens, geese and turkeys were also raised on this farm. Following World War I, farm prices broke sharply and the farm was sold. James Edward then purchased land in Wheatfield, Jasper Co., IN where he died 27 June 1922. Madora died 30 October 1959. They are buried in Memorial Cemetery, Monroeville, IN.