Page 115. [Not in MCW, nor in Magruder's Index of Maryland Colonial Wills] Will of Edward DOSO[N] of PG Co, gentleman, very sick and weak in body. Date: 20 July 1747 [Recorded drastically out of sequence]. To Margrat my dearly beloved wife the land I hold being part of "My Lords Mannour Conigchego" and alI the movables accepting [excepting] one mear [mare] called Jenny during her life and afterwards to be divided equally among the children [not named]. Signed: Edward (D) DOSON. Wit: Philip PRATHER, Thomasimas (T) SOUTH, Timothy (TD) DOWNING.
Endorsed: "Lodged in the office 15 Aug. 1748." [Deputy Commissary not identified.] 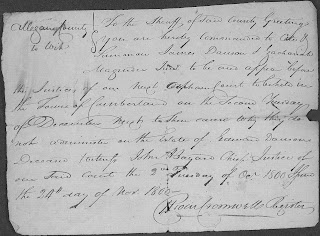 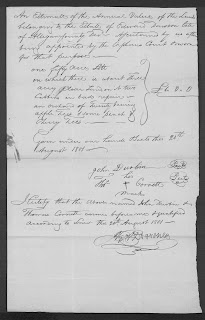 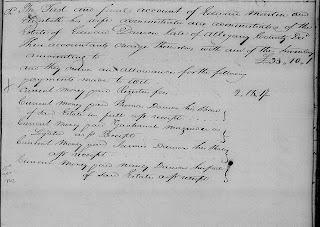 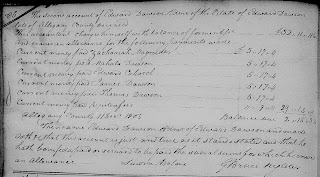 In the Name of God, Amen, I Daniel Cresap Senior of Allegany County in the State of Maryland, being Weak in Body, but of perfect and sound mind and understanding, thanks to Almighty God therefor, Calling to mind the shortness of Life, and the uncertainty of the duration thereof, and being willing to dispose of the property that I am blessed with in this World, do make and ordain this to be my Last Will and Testament, in manner & form following to Wit,:

I do order and Direct that my Executors hereafter named do in a Christian like, and decent manner, Bury my Body in the Earth, as to them may appear the most advisable, and as to my whole Estate of which I am possessed, I do give and bequeath unto my Son Van Cresap the following piece or parcel of Land on which he now lives, the said piece or parcel of land beginning at the Mouth of Rowe Run, on the south Bank of the same, and on the Bank of Potowmack River, and running up the said River to the Bounded Trees of Roses Mistake, then leaving the River, and running North fifty Degrees to the West, with a Marked line of Trees through the Mud Lick and to the North West extremity of my Land then with the outlines of the same Northwestward until it intersects the Line of the land hereafter Bequeathed to my Son Robert Cresap, then with the marked Line to the Beginning, the same to be held to him the said Van Cresap and his Heirs forever.

Item. I give and Bequeath unto my Son Robert Cresap, hie heirs and Assigns for ever, the following piece or parcel of Land on which he now lives, and lying between the Land above mentioned bequeathed to my Son Van Cresap, and the Land by me heretofore conveyed to my Son Daniel Cresap Junr. (Deceased) the same Land beginning at the Corner of the Land conveyed to my Son Daniel on the Bank of Patowmack River, and Running up the River with the Meanders, including also an Island opposite, in the Patowmack River, and then down the Island Gut to the Mouth of a Run called Rowe Run, or within two Rods from the Mouth of the said Run, where a Stone is planted, and then Running from the River towards the Allegany, North fifty Degrees to the West, with a Marked line of Trees as far as the North West extremity of my Land to a planted Stone, then running Northward with the outlines of my Land, until it intersects the Land Conveyed to Daniel Cresap Junr and then with his Line to the Beginning.

Also, I give and bequeath unto my Son Robert Cresap and his Heirs and Assigns, all the Land which I own or to which I have any Rights or Claims to, situate, lying and being above the Land lately owned by Edward Dawson (deceased) and on which his Widow now resides.

Item. I give and Bequeath unto my Son Thomas Cresap, and to his Heirs and Assigns for ever, the following piece or parcel of Land, the same beginning at the Bounded Trees of a Tract of Land called Roses Mistake near the Mouth of the Mill run, and on the Bank of the River Patowmack, then Running with the Meanders of the River, up, South ten Degrees East, One Hundred and fifty one Poles, then South Twenty five Degrees West, eighty three Poles near to a poplar, standing at the Edge of the said River, then from the River, North fifty four degrees West South of the Spring House, within Six poles South West of the Stone House in which I now Reside, still continuing on the Course to the North West extremity of my Land, then with the outlines of the same Northward, to the line of the Land above, bequeathed to my Son Van Cresap, then with his Line reversed through the MudLick to the place of beginning.

Item. I give and Bequeath unto my Son James Cresap, his Heirs and Assigns for ever, the following piece or parcel of Land, to Wit, beginning at a planted Stone within one pole of a poplar standing on the Edge of Patowmack River, and running up the River, with the Meanders of the same, to a Bounded Tree on the side of Fort Hill near said River, then with the outlines of my Land to the Land lately owned by Edward Dawson (deceased) and on which his Widow now Resides, then with said Daswon's Lines so as to Include two Lots to the North Westward of said Dawson Land, then with the outlines of my Land, until it Intersects the Line of my Land bequeathed to my Son Thomas Cresap, then with his Line reversed to the beginning.

Also I give and bequeath unto my Son James Cresap, and his Heirs and Assigns, one other Tract piece or parcel of Land, situate lying and being in the Forks of the Mill Run, called "Deer Park" and also one other Tract called "Folly" adjoining Thomas Grum's Land.

Item: I give and Bequeath unto my Son Joseph Cresap, and his Heirs and Assigns, One Desk, which is now at his House.

Item: I give and Bequeath unto my Daughter Elizabeth Collins, married to Thomas Collins, the Negro Man named Will, now in their possession as her Share.

Item: My Will is that ten Lots of Land known and distinguished by No. ____ Lying and being, between the Land of Joseph Cresap, and Robert Cresap should be the property of my Grandsons Edward & John Cresap, providing that the Executor of the Estate of my Son Daniel Cresap (deceased) shall pay to me, or my Executors herein after named and appointed, all Legal Costs and Charges, with legal Interest on said Cost and Charges, that have accrued, or my Accrue, on the ten Lots of Land aforesaid, to them their Heirs and Assigns forever.

Item: My Will is, and I do order and direct, that the Land heretofore bequeathed to my Son James Cresap, shall be subject to have a Mill Race on it, if my Son Thomas Cresap shall think proper to Build a Mill on the Land to him bequeathed, or his Heirs and Assigns, and for that purpose shall request to have a Mill Race on my Son James Land, the Race to me made on the most Convenient, and least Injurious to the Land and Convenient for the Mill.

Item: Should any of my Real or personal Estate be left after my decease un-bequeathed, it is my Will, and I do hereby ordain, that it be equally Divided by my Executors, betwixt my three Grand Daughters Rebecka, Hannah and Julia Ogle, to be paid to them as they shall arrive to the Age of Twenty one Years; but if any or either of them Die to be equally Divided among the Survivors or Survivor.

In Testimony whereof, I have hereunto set my Hand, and set my Seal, this Eighteenth day of June in the Year of our Lord, One Thousand Seven Hundred & Ninety Six.

Signed, Sealed, published, declared and pronounced, by the said Daniel Cresap Sen r. To be his last Will and Testament, and at the doing the same he was, and appeared to be, in perfect mind and Memory, and that we signed our Names thereto at his request, and in presence of each other.

Email ThisBlogThis!Share to TwitterShare to FacebookShare to Pinterest
Labels: Wills and Probate